Architect/Principal Scott Bowen loves a good story almost as much as he loves architecture. In the last few years, he has found ways to merge the two into the driving force behind MSB Architects. Your Story Built isn't just our motto, but how Scott approaches each new design. 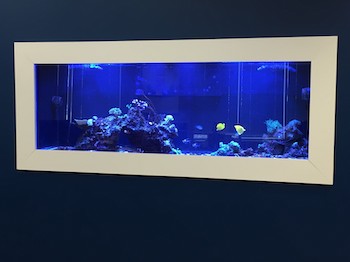 As you may know my second passion, after architecture, is my fish tank. My obsession began in middle school when I got my first tank. It was 29 gallons and had a typical setup. Hang on back filter, fluorescent lights, and freshwater fish. The only notable items were a pair of fish called ‘Kissing Fish’. As you might guess from their name, they press lips together in the tank and look like they are kissing.

A few years later, I decided to take the plunge into saltwater. Obviously, this meant I now had to add salt to the water. However, this was not the only difference between the fish tanks. The living creatures in my saltwater tank, like corals and anemones, require additional equipment to survive. Primarily the lighting was the biggest upgrade. Most of the non-fish life in the ocean can’t move, so in addition to any food the wanders into its grip, they depend on the nutrients of the sun. Fluorescent lights don’t provide the quality of light to provide these nutrients. I was happy with this setup until an ice storm hit our area. We lost power for over a week and I lost everything in the tank. I was devastated, so it was time for a hiatus.

Fast forward 10 years and the itch struck again. It was time to get a new fish tank. Things in the industry had changed, so I only wanted to dip my toe in to explore the options. I started with a 30-gallon all-in-one cube fish tank. All-in-one tanks are nice because they come with everything you need. Over time, I added a few upgrades but in short order, I wanted to explore other options. Six months later, I got a 75-gallon fish tank for the office. When we moved our office to Hagerstown, I upgraded that to a 150-gallon tank. Now it’s time to move again, which means time for another upgrade.

The new office will feature a 225-gallon drop-off tank. A drop-off tank is where part of the tank is deeper than another, hence drop-off. This vertical drop provides a unique cliff aesthetic which is not often seen in the aquarium world. Like our current office fish tank, this will be installed in the wall but instead of centering it, we are sliding it to the corner. This will leave the aquarium exposed on one side full side, in addition to the face. We made sure to position it close to the main entrance so everyone stopping by can enjoy. Are there any fish you would like to see in the tank?